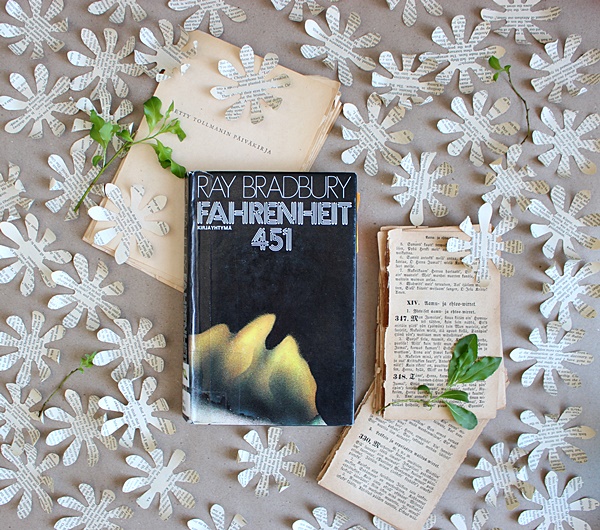 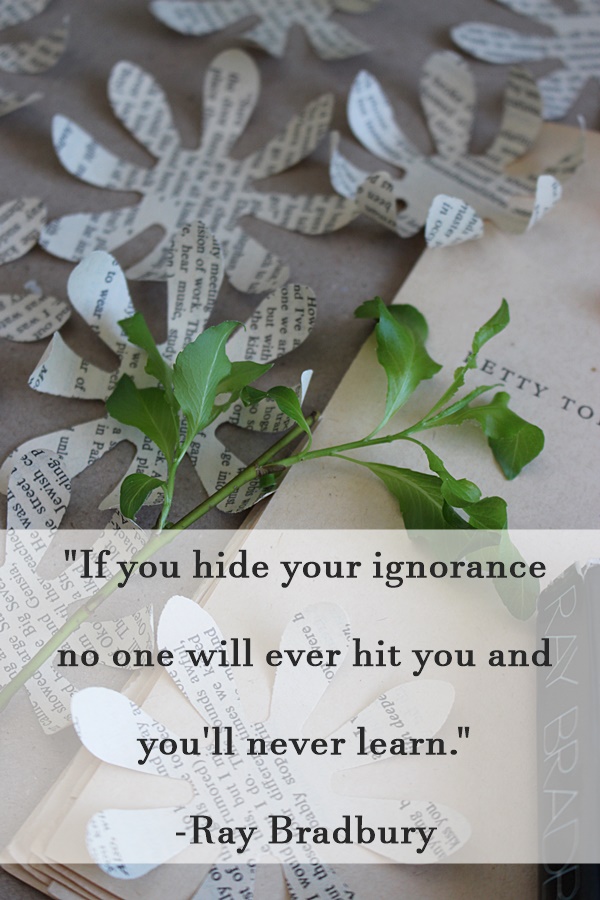 15/52 Ray Bradbury: Fahrenheit 451 (1953)
The main character Guy Montag is a fireman living in a dystopian world where literature is banned and when books are found from someone's home the whole house is burned down. In Fahrenheit 451's world societal discussion has a veil of liberalism but it is just a surface to misguide people from seeing what is actually going on. Writers have been restricted from writing what they think so that their writings would not hurt anyone's feelings. Because literature has become neutral it doesn't interest anymore. The world seems fine but hides a wide spread anarchy. There is lots of violence going on and people don't pay attention to what is happening to other human beings. Empathy has vanished and entertainment is filling the emotional vacuum with rough and aggressive content.

This dystopian picture of the humankind is current as ever when we look at how media works today and the ways of common discussion. We have more platforms to use to say our opinions and social media has made it possible to use our voice in a very achievable methods. Yet our time is such that one might be afraid to say their opinion in fear of being misunderstood. In social media, that  is quick in it's moves, a clause can be cut out from it's context and given a new meaning. Even well meaning and constructive discussion openings can be turned upside down. Instead of continuing the thought and evolving it, a lot of  energy is used to examine it's form and weaknesses. We avoid conflict but at the same time people are divided into two separate groups in many public discussions. In fair discussion we could actually find the things we disagree and agree in disagreement. Then we could also concentrate on living together and constructing communities to those multiple things we agree. Because disagreement doesn't have to mean that the other party has to win and prove oneself right. In civilized and democratic community we can choose to see issues differently. Also in honest discussion we can learn. Like Faber says to Montag "If you hide our ignorance no one will ever hit you and you'll never learn." If we don't have the courage, or place, to say what we think and show where our thinking process is at the moment we don't expose ourselves to new knowledge and chance to get criticized and challenged to re-evaluate what we think is true. The world holds as many truths as there are people. Also it is part of life that what one holds as truth changes during the life. It is as it should be. Otherwise we have not exposed ourselves to life and it's influence on us. Today's societal discussion has a resemblance with what Bradbury describes in Fahrenheit 451. There seems to be need to have simple black and white answers to complex issues. Instead of acknowledging that an issue has many sides two opposing parties are built. Then these parties can yell each other from the opposite sides of the room. Rough contrasts are good entertainment. But it is not entertainment without a cost. When public discussion about societal issues is modified to a gladiator battle it doesn't lead to solutions that would benefit the common interest. When public speakers are pictured as flat characters in a game there is a danger that good points for discussion are muted just because of the part that that character is put to play. Behind the scenes of entertainment society someone uses power when we stare the show.

Another interesting theme Bradbury brings up is the way we understand the difference between entertainment and real life. The main character Montag's wife Mildred has become talented in reading from the lips because she has some sort of headphones on all the time. She also follows keenly the life of her so called relatives, that are as I understood it, characters of a TV show. Montag suffers from the lack of communication in their relationship and also ponders how little people really talk with each other about subjects that matter. Commercial talk has taken the place of private discussion. Word of mouth is maybe the oldest form of advertising so there is nothing new. Still it is a scary thought if in the future we would become nothing more than brand talking and consuming machines. I also thought about how our brain functions when we binge series. Can we actually understand that it is a play? Films and series are entertainment. They are also art forms, some having more ambitious artistic goals than others. A good film for example can open a new world and help to understand other people and also make us learn something new about ourselves. Its the same with other forms of art as well. Yet the amount of programs we can watch is huge and it is easy to stop living one's own life and just stare life from screen. Favorite series' character's fortunes and misfortunes become important. I have often told about how I was watching films a bit too much over on year ago. One day I came to think that wait a minute, these interesting things are not actually happening to me, I am just sitting here and watching a play.

Technological improvements are making entertainment feel even more real. Think about virtual glasses for example. Can our brain actually register what is real or fake? In the moment binging entertainment might feel great shortcut to experiences. It is question of values actually and if we appreciate reality. The classic test to evaluate our priorities is the rocking chair. When old, sitting in the rocking chair watching back life, would you be satisfied to memorize all the great moments of love, friendship, courage, excitement, fear that you experienced through screen or what ever technology we might have coming. Oh my! That time when I voted with my phone who should win in that reality show. Sweet memories about that perfect person built to match my dreams that I saw through virtual glasses. Did we have great time! When I think about these scenarios I can't help how the world around us and our physical body is left somewhere in the matter of universe. Have you seen Spike Jonze's thought provoking film Her about the same, lack of real communication, theme?  In Her people are wearing headphones where they can hear an operating system that communicates with them. The operating system sounds like real person and is able to talk and it has a sense of humor. People begin to fall in love with their operating systems and in one scene they walk through the city streets passing each other concentrated to what they hear through their headphones. The picture is not far from what we see around us in today's world. It is the same world Montag feels anxious and alien in. In Jussi Valtonen's novel They Know Not What They Do family's daughter sits in the dining table looking  front of herself expressionless. By a new technology she is surfing from site to site and sees all in her brain. With the technology one can move to a new site before even knowing consciously what one wants to see.

The world Montag sees around him is bound in front of TVs. People don't know how to practice criticism and they take everything as given. All materials that could provoke one to think have been vanished. It is easy world with no need to criticize or evaluate controversial messages. But it is not a happy place. There is a war going on all the time and people are just cleverly distracted and manipulated. What we see on media is human made and can contain mistakes and misunderstandings. To have background knowledge, sense of context and skill to question what is said is essential so we don't build our life and decisions on lies. It is appealing to keep one authority over all, to think that they know all and that we can trust their word. But even the well meaning people are human beings and make mistakes. That is why we need to see the effort and use our brain: see what other people have thought and read about their views, study the backgrounds, meet people, have a discussion, criticize, learn and act. And it is actually quite pleasing to be in a world and fully see it how it is, not just it's limited presentation. 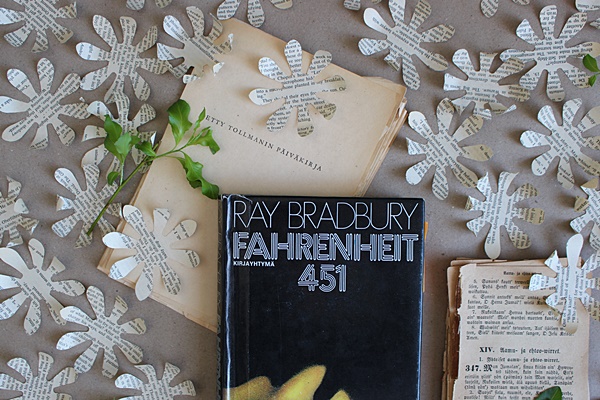 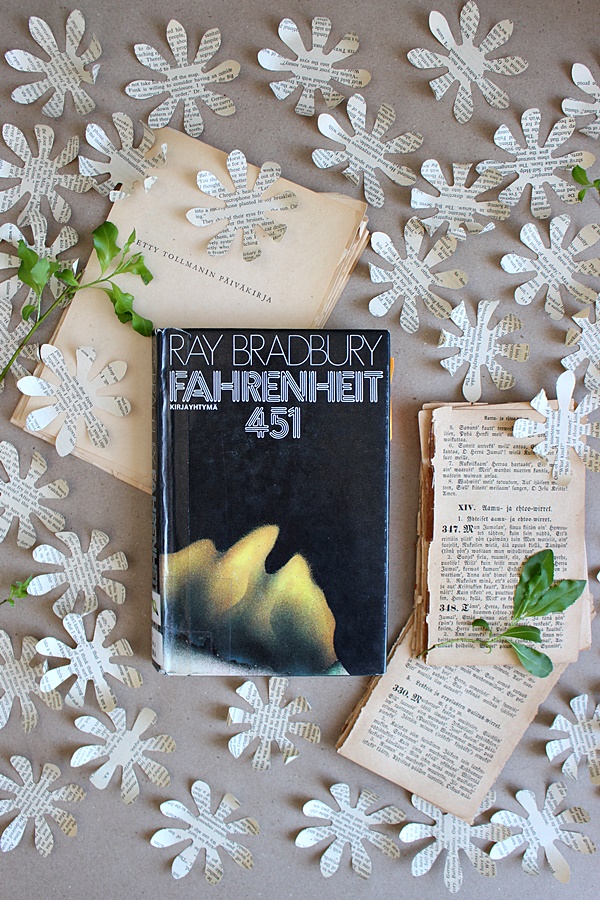