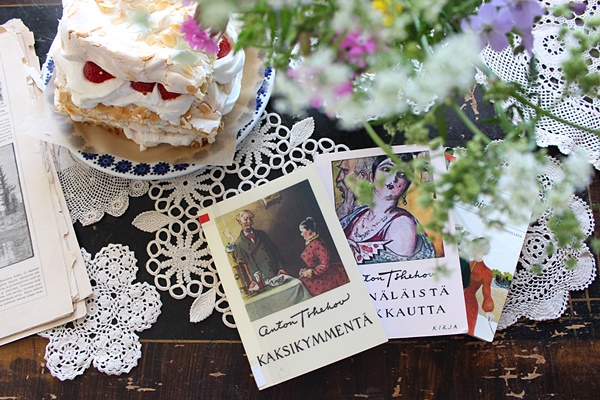 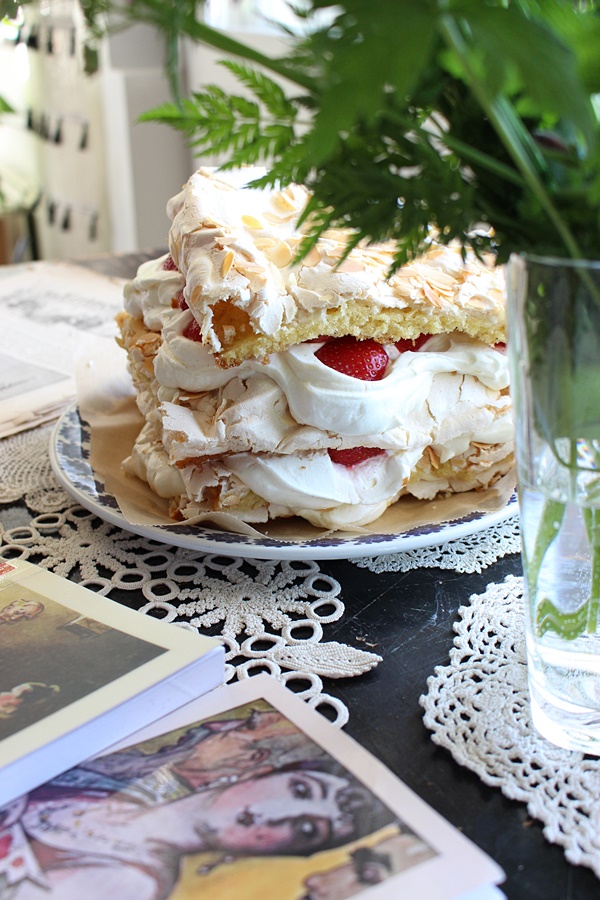 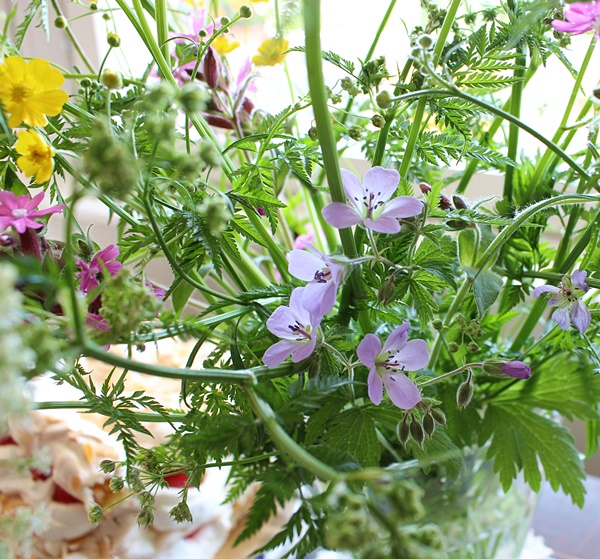 After I finished Anna Karenina on February my Instagram friend recommended me Anton Chekhov as one of her favorites from Russian classics. I love to get reading recommendations and the next week I went to get a novel collection from Chekhov. As every time I go near the library I tend to carry home 3-8 books I didn't get to read that novel collection anytime soon. I also like to wait for the right mood for every book instead of just reading mindlessly. There is a perfect time for every book when it comes to bloom in your life.

Midwinter moths were perfect for Anna Karenina and these early summer days fit for Chekhov's short stories. Where ever you choose to turn your head you see lush groves and airy flowers that are like sprinkles on top of all that green. Corner of the old wooden building bathes in the sunlight. There are wheelbarrows, shovels and bags of flowers to be put to the soil. Somehow all that I described to you is a picture of Chekhov's short stories even though not all of them are light and amusing. When I began with the first collection of stories, that I had brought home months ago, I found it difficult to stop. I felt I need to read more stories to build an impression what Chekhov's novels are about. There are many themes from surprising little happenings to ponderings about love and life. What I found out after three collections was a certain style to plainly accept what happens in life. Many of the main characters are only half taking part to their own lives. They are sort of frozen to the moment and waiting. And this was why I needed to read more these stories. First it was difficult to understand that the people whose lives are described are not moving. Their life doesn't change or they don't come to a conclusion that would direct their life to another path. Not all of the stories are like that but quite big part.

There were many lovers in these stories that met in beautiful circumstances. Like everything was set up for success but then something happens. Or actually what happens is that nothing happens. The lovers miss the final push to act and start. It feels like they meet in spring when all blooms and invites to passion and strong emotions. Then they stay still when seasons change and only do they see time passing when the chance to start has been missed. In one story two young people are sledging and a boy whispers every time they go down hill that he loves her. The girl waits it to turn something bigger but what is left is that after the years the man doesn't know why he whispered those words. All these scenes that are so romantic turn into grey and meaningless in the stream of life where they lose their meaning because nothing happens. In Vera the name character is described with love as a day dreamer who reads a lot and whose looks are a bit shabby yet cute. Even the curl coming from her bun is described as only a person who is in love would describe. But then the main character to whom Vera confesses her love leaves the scene, goes home and starts his mundane chores leaving Vera. In Miss N.N.:s Story the couple is in love when it is summer and they are on the country side but then when winter season comes they don't seem to reach each other and in the end Miss N.N. looks back and ponders where the whole life has gone. What nails the atmosphere and how these couples wait for the great turn is said in Lady with Lapdog. The couple has found each other and they are both in love despite the circumstances where both are promised elsewhere.


"And it seemed as though in a little while a solution would be found, and then a new and splendid life would begin.."

And then in this case they are left waiting and the end is open and one can think they find a way to be together. But in many of these novels the lovers just let the moment pass and then visit back their life and how they once had great expectations about it. 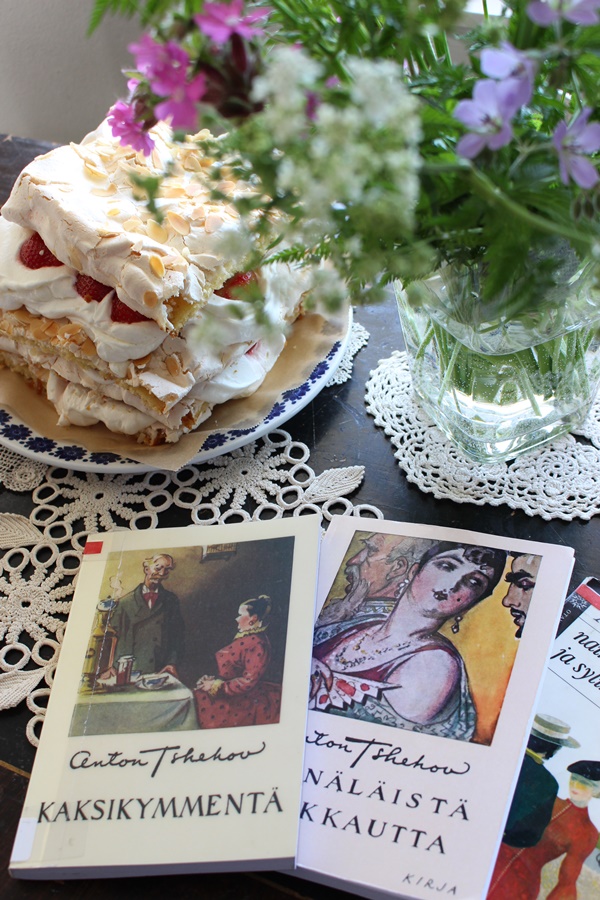 It is not just the stories of love that have this melancholic and matter-or-fact tone. For example death of a main character is pictured the same manner. They live and then the life is over. It is like an everyday incident. A young man makes suicide because he can't stand the thought that somewhere life is better and people have love, joy and warmth. He sees it is far from his reach and ends his days. His tragic tale is written in very minimalist manner that feels a bit blunt actually. I was left thinking how could that happen? Same with a man who dies on the shame of sneezing to other man's neck. Death is like an unexpected turn that ends the whole story. And maybe that is it, death is complete and no matter what kind of life and thoughts one has had before, it all ends in the person's head. And if it is the main character that dies the story dies. And people who are left living and their feelings after the tragedy are another story where the person who passed away has no voice to take a part.

I loved the character of Sofia Lvovna in The Big Volodya and Little Volodya. She is so relatable lying under the blanket horrified by the big questions of life. In the company of her friends and husband she is taking part to parties and having fun. Her essence seems light and satisfied with her life. But when evening comes she burrows to blankets and thinks about her life and if it is at all what she wants it to be. How many of us lay terrified when alone in the dark and the distracting company of the day being just a small track in our mind. It is easy to be light on day and rush from task to task, participate and make decisions. But when dawn arrives all the things that were clear get new shades. Who am I, where and how do I actually want to spend my life? I can see the moment from inside and outside view. A messy bun coming out from the rummaged sheets, eyes big and and mouth just a tight line. It is the moment when heart begins to beat faster and one doesn't have any clue about daylight and mundane happenings that fill the hours awake. In those hours one would like to be given simple answers. Sofia's friend has solved the big puzzle by going to the monastery. Sofia envies her certainty about what life is and what happens after we die. It is those questions that in the end we have to try to solve alone. When day arrives we can put our big puzzle behind and concentrate to what is know. 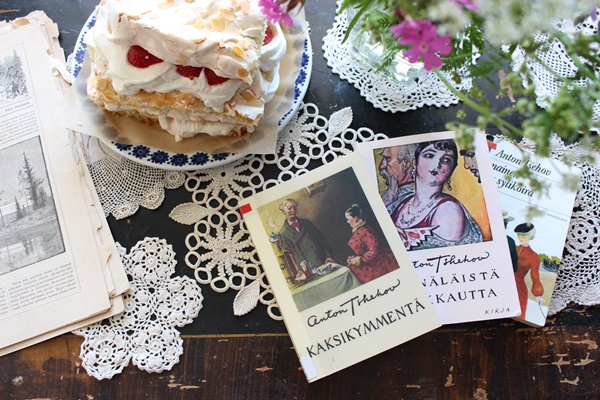 Same kind of situation as Sofia's is described in A Nervous Breakdown. Vasiljev is asked to come and party with his friends. He doesn't get to the same mood as his friends who seem to be enjoying their life with ease. Instead of taking part to the fun he begins to observe the brothels they visit. He wants to know how the women in the houses are doing, he feels bad that they have to work as prostitutes and in the end wants to find a way to help them. The pressure to do something becomes a pain and he gets horrified. It is not about the issue what he takes as his mission but the need to have a mission that is the main thing. He feels there is something to do to make the world better. In the middle of all we see the wrongs of the world and we have an urge to fix. But like Vasiljev we only get stupefied by this invention of our role. And what makes Vasiljev so familiar is how he knows that this state will last only three days. What seems serious and matter of life and death is just a passing moment that doesn't lead to anything. Big and important notions go to the background to be pulled out when the next moment arrives.

With some stories I felt there was a moral lesson that is expressed quite directly. In The Ravin and The Bet examine wealth and moral issues. In The Ravin poor girl is married to wealthy family where she is not appreciated and the family members bully her. First it looks like she has gotten to better societies and that the members of the family are successful. But after time the real wealth reveals and poor Lipa who has bread to give to her father in law is the rich one. This is a very classic plot where poor one has to give when rich are blinded by money and fame. In The Bet the winner feels how money has lost it's appeal. In The Grasshopper Olga Ivanovna is married to a man who seems to be too modest for her and the societies she is a member of. All her friends are talented, artistic and, if not already famous, they are going to be some day. They have a great faith for themselves and they appreciate each other's work. Dimov is a doctor and doesn't get the same respect as the other members of the society. He is an outsider and share enabler to their lifestyle. Olga begins to take advantage of his kindness and use him cold-heartedly. But in the end it turns out he has been respected member of the academia and among the doctors and actually the only notable and meaningful person. The same sound is in The First-class Passenger that examines fame. A man in a train begins to tell his story to a person next to him. He explains to whom fame comes. He goes through his career and it becomes clear to the reader that he has been both talented and hard working. Yet his name is not known and magazines are not interested in his work. At the same time people who are not nearly as talented are getting room in the public discussion. 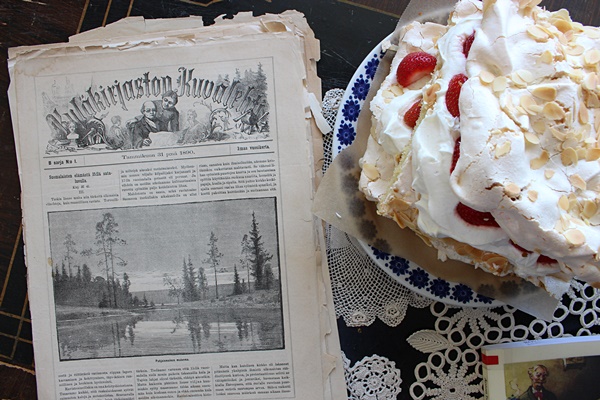 These stories bring up the same theme, who is getting acknowledged and appreciated and who is put to the shadows. Like in our days people who are doing hard work to develop their talent, who are trying to construct our society and whose work is actually essential to all of our well being are set to the background. There has been talk about how scientist for example don't get their results known and spread in the media. Everything lasts for a second and more entertaining content gets clicks and shares. We might not know about some important breakthroughs in science our streams being full of empty statements. Like the engineer in the first-class whose accomplishments were in the corner of the magazine when a mediocre celebrity gets the headlines. It is how world lies. Olga's society keeps themselves worthy of admiration. So thinks the engineer. But for some weird trick of life only the one gets appreciation and is known by people. Chekhov in very direct expressing who that one should be when he lists chemists, physicists, mechanics, farmers, artists and writers as one left to the shadows. 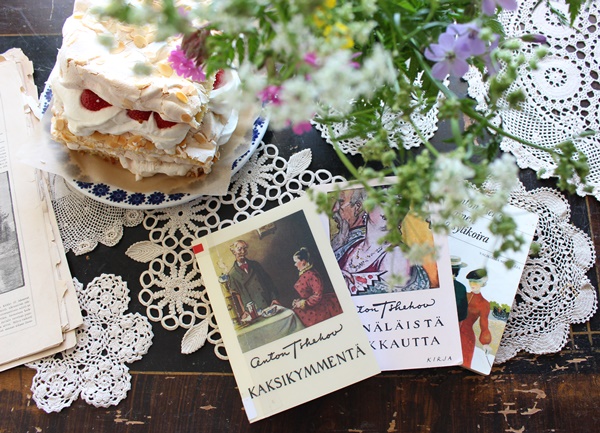 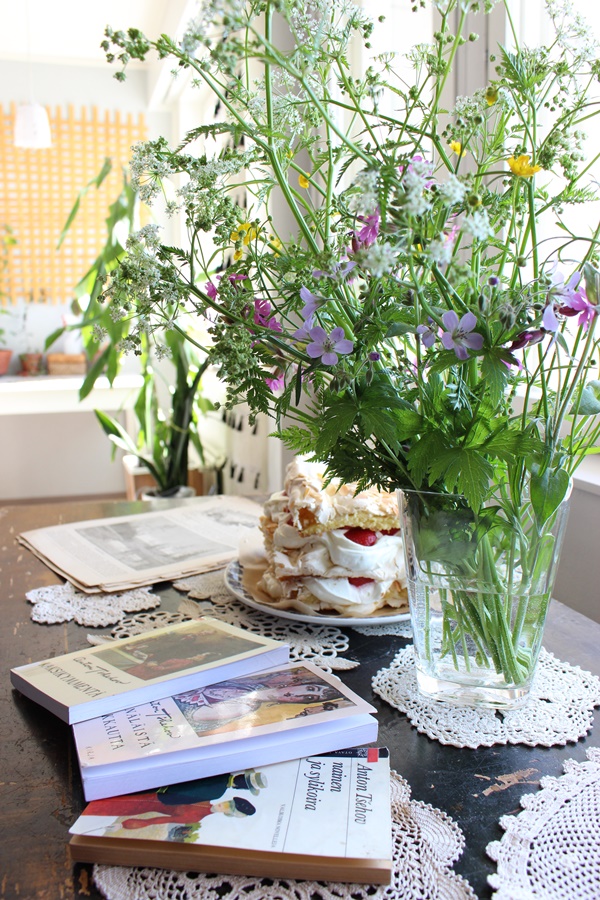 I read following short story collections from Anton Chekhov: Nainen ja sylikoira (1973). Venäläistä rakkautta (1929, re.print. 2012). Kaksikymmentä (1929, re.print. 2012). These collections have been published in Finnish and I don't know if the short stories have been collected to same kind of volumes in other countries.
Posted by Sannu Vaarala at 15:33