When Did I Lose My Edge? 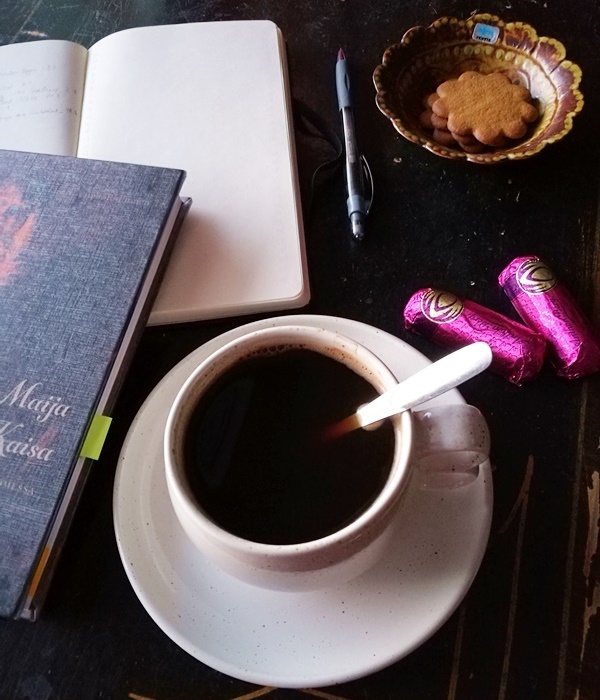 People have been posting then and now pictures of themselves with the theme Ten Year Challenge. I have got very few pictures from that time that would be in digital form so this time I am not posting an old picture of myself. Instead I am talking about a notion I made today. Ten years ago when I was in my late teens I had lots of guts to open my mouth and tell my opinions. Back then I wasn't afraid to argue. Neither was I afraid of being wrong. If someone asked me about my goals those where high and I was sure I would meet them sooner or later (meaning in a year or two). In the beginning of 2019 I have got more confidence in some issues but then again I am a bit sad about losing that healthy arrogance that made me trust my own opinions.

I graduated from high school spring 2009 and began my studies at the University of Helsinki. I had been interested in arts and history of the Nordic Countries. After lots of pondering I thought that in the theological faculty I might be able to develop further all the various interests I had that time. One of my ideas was to become the first female archbishop in the Evangelical Lutheran Church of Finland. The fact that I had never even read the Bible from cover to cover didn't much bother me. I bough audio Bible and decided to learn the word by listening. After one year of studying I moved to Lapland and began my studies at the faculty of social sciences. Social sciences turned out to be a great decision. I had enjoyed my studies at the theological faculty but social sciences offered me ways to see how the different phenomenons are twined together and how we are in the society.

When nineteen I was not afraid to write strong opinions. Nowadays I am more careful which is both good and bad. About ten years ago I visited in a contemporary arts exhibition and I was devastated by the low level of works. Never did ever occur to my mind that my own level of thinking and seeing would have been limited. Well, at least I was frank back then, said what I thought and that was that. Now as more mature I try to be constructive and see the good sides in everything. If I doubt something, I am afraid to say it out loud because someone might get hurt. It is a sign of adulthood to see many sides in everything, to have more empathy and understanding. But I might have lost the courage to say when shit is shit, not wonderful shades of brown with interesting scent. It would be healthy to be able to react more spontaneously at times.

I am not suggesting that as grown-ups we should be saying every thought that comes to our minds without any processing. But there is personal power in believing your own capacity to form well constructed opinions and use your voice. To begin a discussion that benefits both those pro and against. Point is not to attack verbally of otherwise against other people and their work or personality. Instead of that it is fruitful to take part to conversations that are on. After year or too opinions might have changed drastically and I might not agree with the opinions of the 19, 25 or 28 year old self. That is called growth. I think we are sometimes afraid of changing. Fear of coming to other thoughts can become a factor that stops us from living in the moment and moving. Decisions are born in current climate and we can't predict what is coming tomorrow that might change us. Past ten years are a good example, lots have happened in that time. Some of the themes are the same but facts have changed, there is new knowledge and ways of thinking. Not to talk about each and everyone's own personal life that has taught a lot.

No one is as clever as a first year University student, said some professor in the beginning of the studies. By the time we come softer and less edgy. But there is also uncertainty, the knowledge that my knowledge is limited. Understanding of the mass of knowledge and issues that have not been searched properly. Would it be too much of a cliche to quote Socrates: The only true wisdom is in knowing you know nothing. So I know next to nothing and I knew even less in my late teens. Yet I thought that with hard work and persistence I could become what ever I wanted. Let it be archbishop or other career path. I saw that those are only people who work in such positions, not saints. I thought that those given the mandate to write art critiques in magazines are human as we all. Maybe more experienced than I was but still the same. So why could't I do it too? After all these years when did this sissy come to picture? One who places words so carefully that ends up saying nothing.

That carefree teen and high school graduate could teach me a lot. And I could tell a thing or too to make her life better. Different sort of confidence has occurred in past two years. Maybe in our twenties we go through a process. First we are confident, know everything about everything, we are active and fearless. Then we begin to see that we are changing, learning new about our self and about how the world goes. We become quiet observers little by little because we are not so sure that we are going to stay the same forever. It takes away some of the edge. But then we loosen the grip a little bit, accept that what we think today might not hold tomorrow but still we have our roles to play. At least I don't think as much what people are thinking about me, or whether they like me or if I please them. I pay more attention to what I actually think about world and it's phenomenons. I use time to ponder if something really feels great and if I enjoy and like it so much that I want to put my time and effort in it. Own role and interests begin to have more meaning than just reacting to what is directed to me.

Ten years ago everything was possible and achievable. Now I know more about what world has to offer and I am aware that I can't be or become excellent in everything. Great deal will be left unexamined by me. But I can find out what interests me the most and be part of it and learn as much as I can. Have opinions, express those and change what I thought was final.
Posted by Sannu Vaarala at 19:11