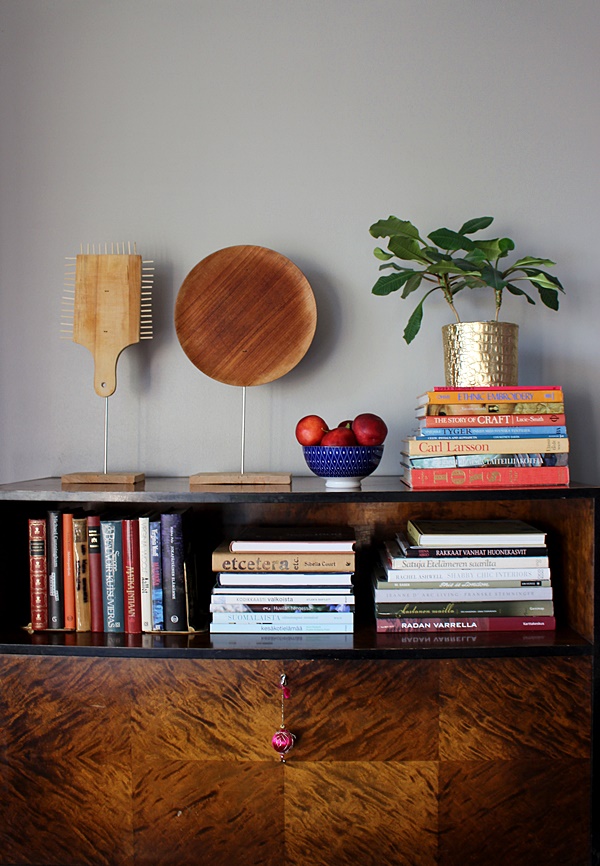 Everyday objects hold so much beauty when you look closely. Like these old chopping boards, every mark on them is a note about life lived. Two of these are from thrift store so I can't say what kind of food these have served. But I could imagine that the round one has had several cheese platters in evening get togethers. Sharp knife has made it's marks on surface when blue cheese, brie, bread cheese etc. have been piled on top of crackers with marmalade. The other one looks more like it has been used to cutting strong onions when soups and sauces have been stirred to fill stomach on Mondays and Wednesdays. What comes to the big chopping board it has been in my own use. I bought it when I moved to my first own place. Apartment was in Helsinki and I had one room in a big grey house of blocks that was cold on winters. I read books and wrote uni essays under a blanket because otherwise I would have freezed. In these past 9 years I have cut lots of bread on it, minced a lorry of onions and sliced veggies and fruits. I have also grated chocolate to deserts and hammered cookies to make great bases for cakes. Past years it has every now and then worked as a surface where I have drilled some minor projects. It has worked well and been worth the money it cost (was it a package of two boards at a tenner?). So much everyday history in a humble object you might not actually even see when you use it.

What would be the next stop for well used chopping board? To be used in the fireplace of cast to waste bin. I have no idea what has made worn out chopping boards so trendy that you can see these in every house if you browse an interiors magazine. Maybe it is part of the huge trend of wooden surfaces and natural look. We want to see authentic and used objects instead of glossy and sterile table tops that look like no one has ever used them. Life is allowed to show and it has become a matter of status to show that there is life outside the screens. That someone has luxurious time to mess around in their home preparing food. Maybe some of these status chopping boards have actually been bought as second hand to add that something to a home that lacks the natural shabbiness.

Past weeks in many continents people have suffered from exceptional heat and the discussion about climate change has run equally hot. I presume that humble used objects will have a new deeper meaning soon. An apartment that has all new from table tops to sofas, carpets and porridge cups might not be something one wishes to show off. Second hand and upcycled items are forms to express that one knows the time we are living and respects the limits of nature. Objects that have become shabby in use are something to show with pride. We might start to compare how well we have used the stuff we have bought, how long it has lasted, how many times we have fixed it and how many years we have still to use it. Some upcycled items tell their former use in an interesting way. I think in the future upcycling is the new norm and we won't be able to tell whether an object is made out of upcycled material or not. Through creative eyes and skilled hands objects take a second form and become new again.

Repaired textiles used to be something to be ashamed of. Was it two years ago when repaired clothes became a fashion trend and patches were allowed to show? I have two design chairs I have bought from thrift store. Both had minor holes in the fabric and I repaired those. With careful inspection one can see that the chairs are not brand new. But both work well in their use and look great. Last year I visited famous Finnish design store Artek. What I saw in the stylish and beautifully curated store was old design chairs that had been painted in Finnish homes in past periods of time. Those chairs were on sale in the store among all new design furniture. It shows how objects that have been practical and beautiful when bought have not lost their value during the years they have seen. Years are allowed to show when the functionality is still the same.

I have heard that wooden chopping boards are not used in professional kitchens because of food hygiene issues. At private homes these are practical and stand against time and knife for years. When too worn out we can lift these to the wall of fame in our kitchens and honor their part in our everyday life. Used board might take us back to the moments we have forgotten and to details of life we haven't even thought about. During that first year in my own place this chopping board did't see much knife. I mainly cooked noodles and soups that required hot water and not much else. After that I became more interested in preparing food and this board has experienced many flavors as I have tested new recipes and invented my own.

What is the story of you chopping board has to tell? Or if you just purchased a new one who knows what exciting adventures it has ahead! Art of everyday. 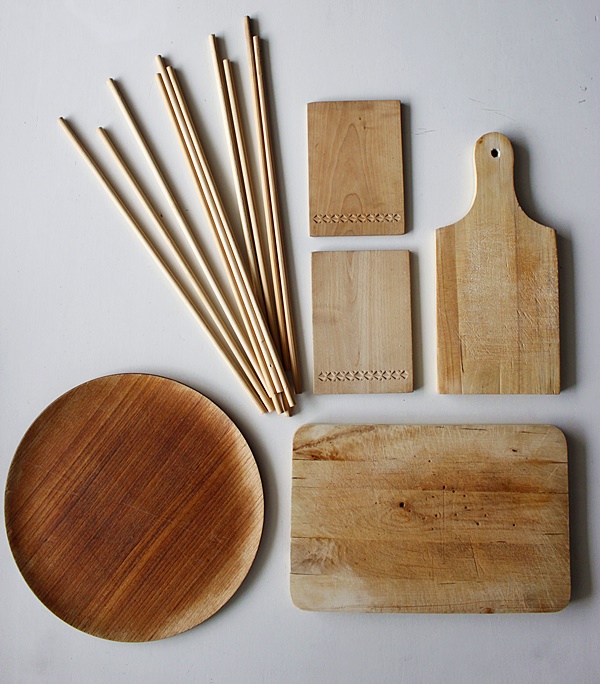 Inspiring wooden materials that are from thrift store. Except the one on right that has seen bread and drill as well as the early noodle period.

Sculptures how to: In the sculptures I made from my chopping boards I used metal sticks that were bought as second hand too. I sawed the biggest board to work as a stand, then drilled a hole for the metal stick. I attached the chopping board to it by drilling two pairs of very small holes to the board and then twining the board to the stick with wire. 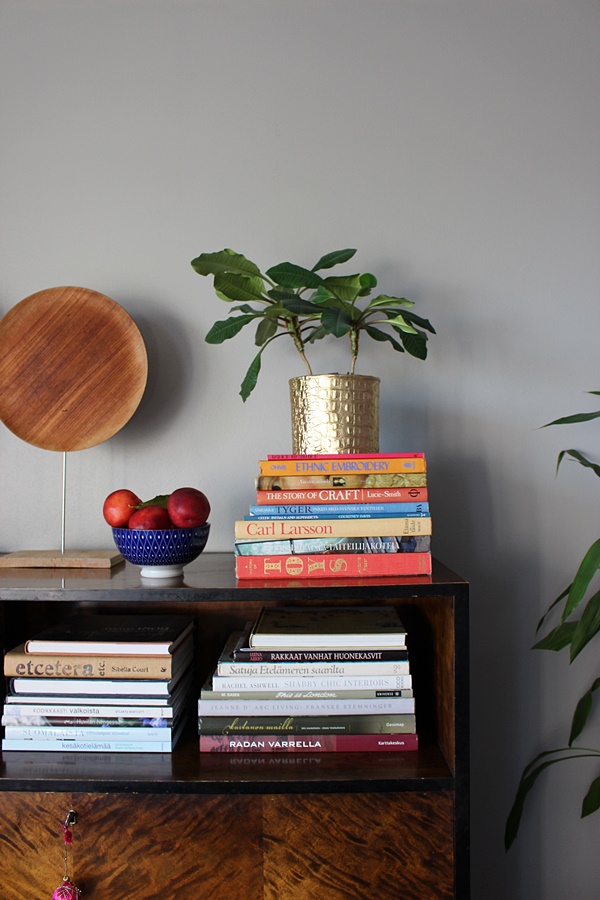 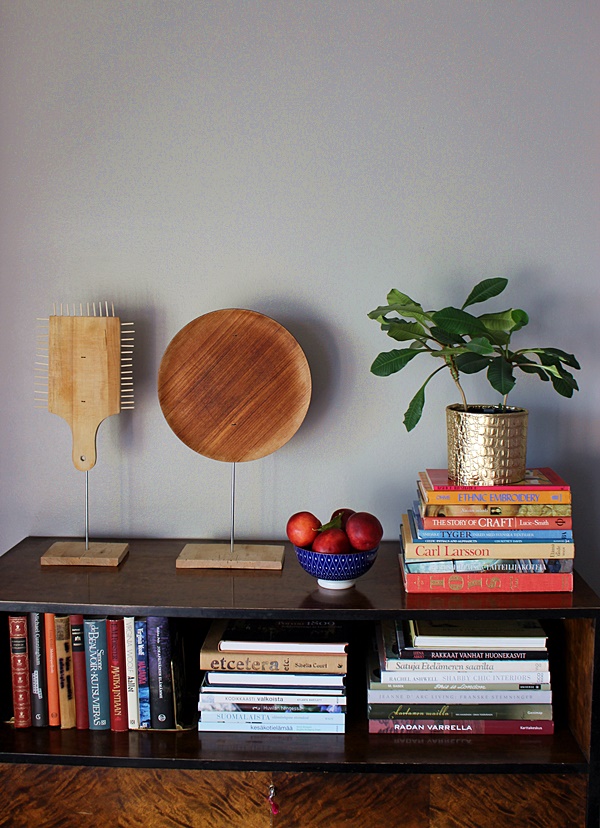 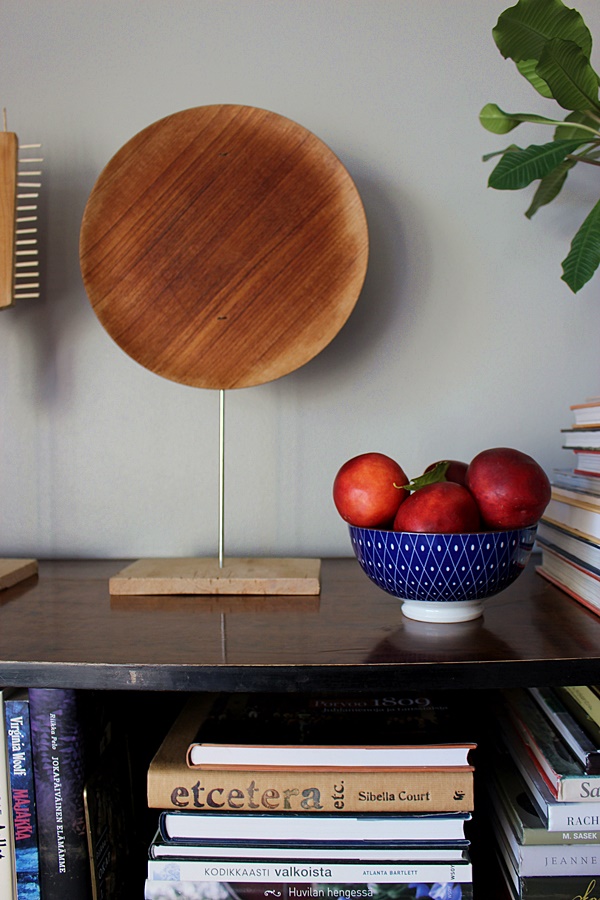 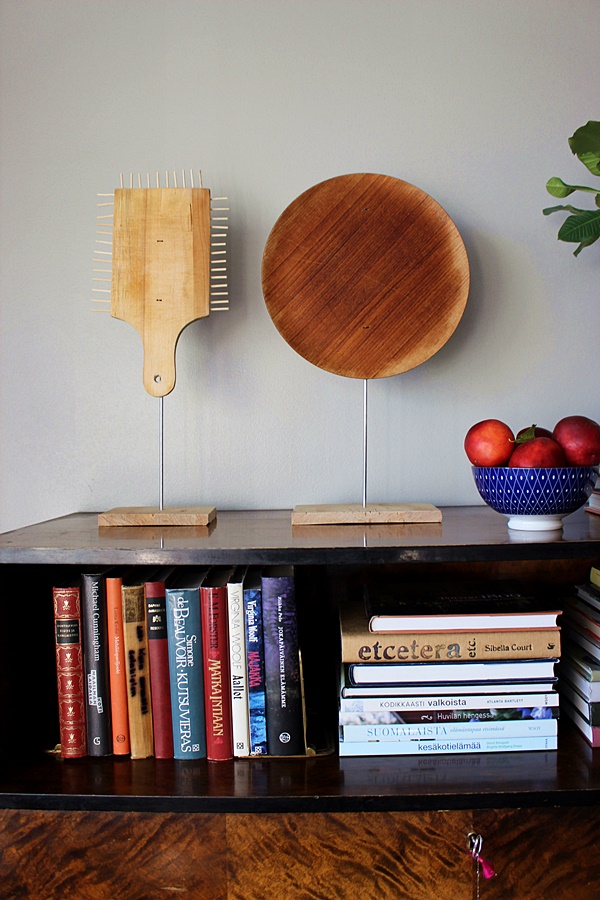 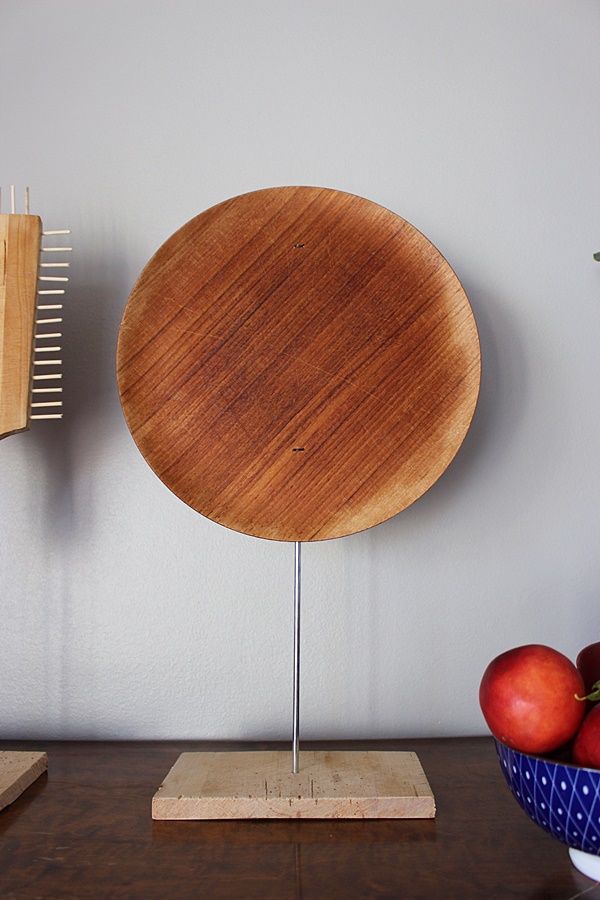 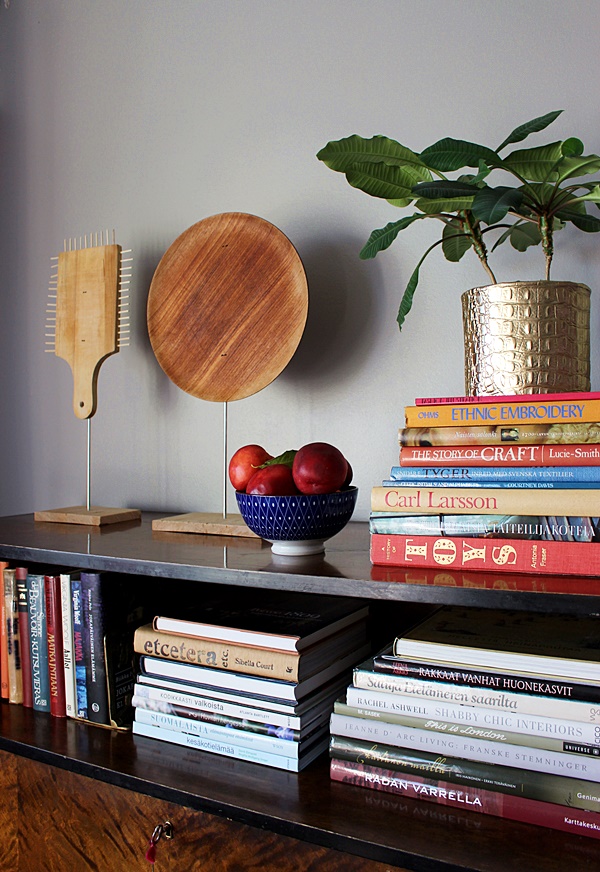 Wishing You the best of weeks!

Sannu
Posted by Sannu Vaarala at 19:28