It is less than two weeks until it is Easter and I am super excited about that. Easter is one of the big festive seasons of the year and it holds lots of traditions. Must have decorations like eggs, Easter twigs and Easter grass hold a lot of possibilities to make themed crafts and DIY projects. So that is why this week will be Easter DIY Week here at the Creative Night Shift and I have got three posts coming this week this post being the first in the series. On every post I have got different DIY project and I also tell you something about the Finnish Easter traditions. 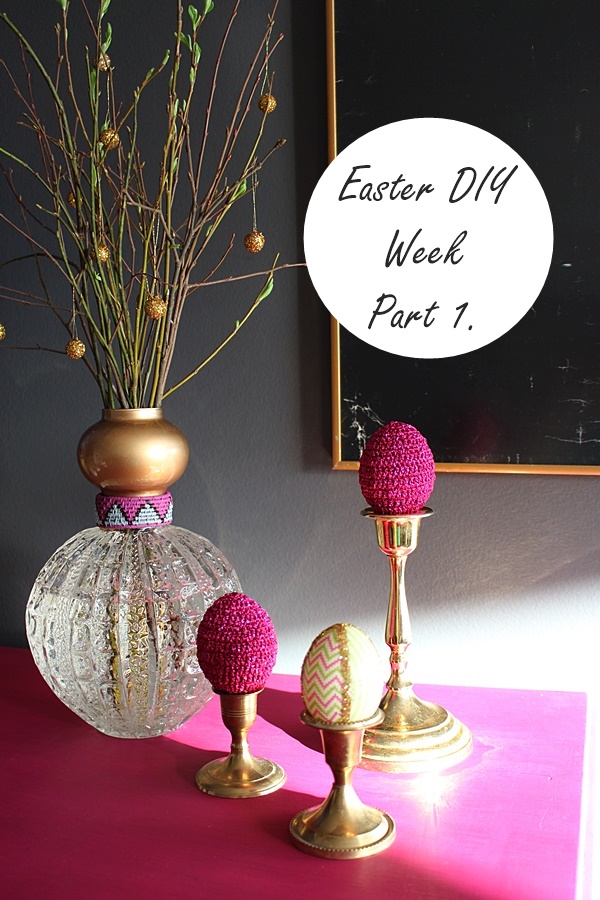 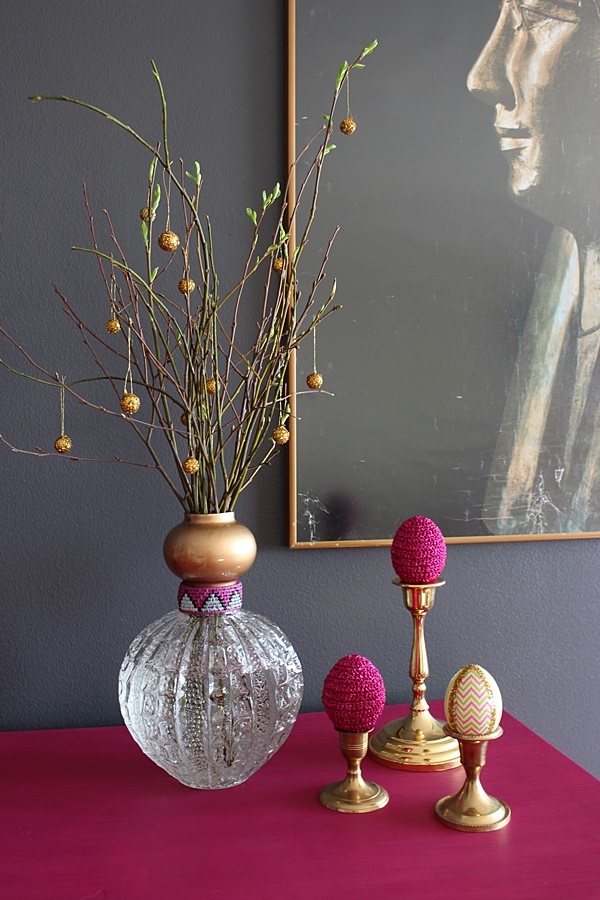 Today I am making a vase for Easter twigs that has got it´s inspiration from fantasy books and movies especially books with magic on my mind. Fantasy books and Easter might seem a bit odd combination but there is actually a link between these two. Witches, that is. So called Easter witches (trulli in Finnish) are a part of Finnish Easter traditions. Finland has always been a mixing pot for Western and Eastern influences and this tradition is a good example of that.  To date back the roots of this tradition we don´t have to go for ancient Romans, Medieval times will do. You might know that during the Medieval times people really believed in witchcraft and that this led to witch-hunts. When I red about Finnish Easter traditions I found out that stories about witchcraft have lived still at the beginning of 1900s when some have even believed in them. Here in Finland these tales lived strong especially at the Osthrobothnia region. Mainly the stories became a source for Easter plays and entertainment.

The logic of combining Easter and the witches is this: It was believed that before Easter Sunday when Jesus was in his grave it was a good time for bad spirits to do their mischief and take for example ones luck with cattle. A witch might for example harm the cattle by cutting some fur from wrong place and this way harm the animal and steal the luck. Witches then flied with brooms, spinning wheels or what ever weird objects to Köypelivuori mountain where they had a gathering. Nowadays these stories are just interesting folk tales that add a special feeling for the Easter season, like Santa Claus and his elves on Christmas.

Next turn in this tradition is how it got combined with the Eastern tradition to wish good luck for the coming year with the Easter twigs. In Eastern Finland children used to go from house to house on Palm Sunday and wish good luck and prosperity for the coming year by waving an Easter twig and saying some rhymes. As you know Easter twigs symbolize branches from a palm tree that people put to ground when Jesus ride to Jerusalem. After a week from the Palm Sunday children went to the same houses and got a small reward like an egg from the people of the house. In about 1970s these two traditions got combined and nowadays children go as little witches from door to door wishing good luck and giving beautifully decorated Easter twigs. As a reward they get chocolate eggs and other kinds of treats.

***
This back story in mind lets go to today´s DIY project that is a fantasy inspired vase for the Easter twigs. This is a good project for a person who loves thrifting as the point is to combine different pieces into an interesting entity that catches the eye on Easter decor. When you make a vase like this you don´t need to decorate the twigs as much. 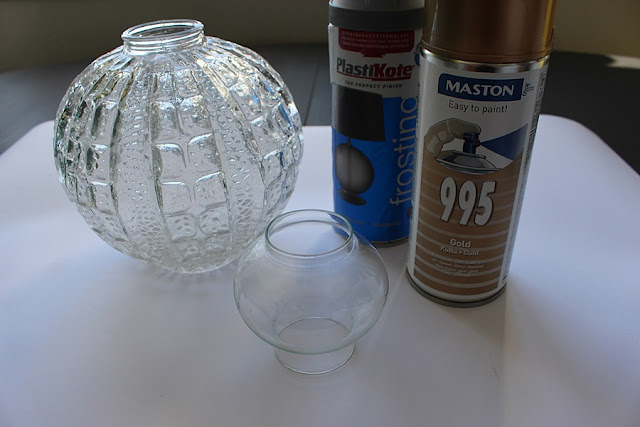 What I used in this project is an interesting glass lamp shade, a small glass part from a candlestick and a napkin ring. It might be impossible to find the exact same items from your cupboard or local thrift shop so be creative. You can combine for example pots, plates, cups, glass ware or candle sticks together. Then consider if some of the parts could be painted to make the entity work better. You could use paint left overs, spray paint or frosting effect. 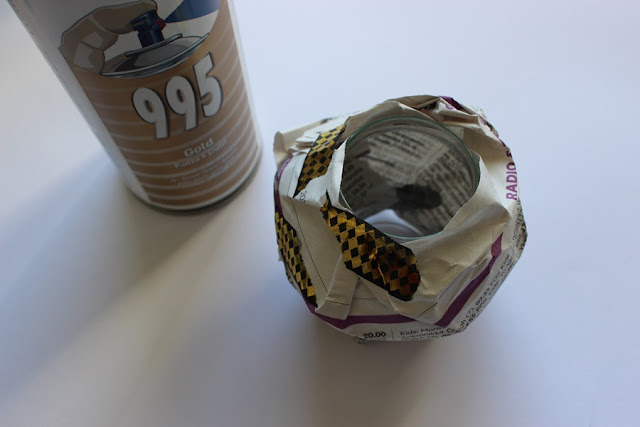 I decided to use golden spray paint in the little glass part. I covered it with paper  so I could spray the paint inside. It was a nice effect to save the glass surface and paint the inside. Spay enough paint so that it flows properly and you get the whole area colored. 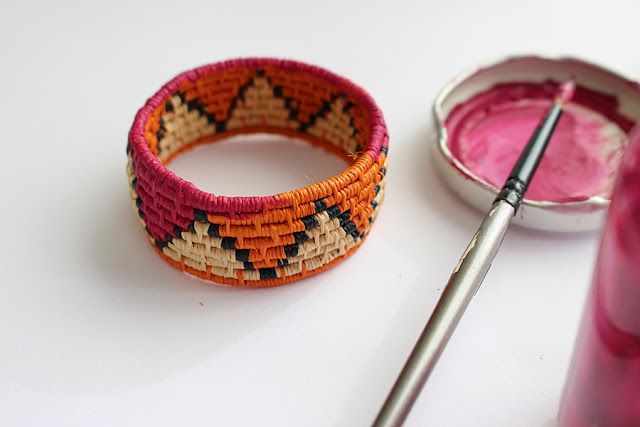 The napkin ring was a perfect finish for the vase and made it a lot more interesting. I painted the napkin ring pink and grey to fit my home decoration better. In this picture I tested the right color and I ended up choosing a pink with more blue in it. Originally the ring was orange and yellow as you can see from the picture.

After all the painting it was time to combine the parts with superglue. To keep in mind when making this kind of DIY is to look for the right forms and materials. You can then change the color and glue some extra details, put ribbons, buttons, pearls or what ever comes to your mind. 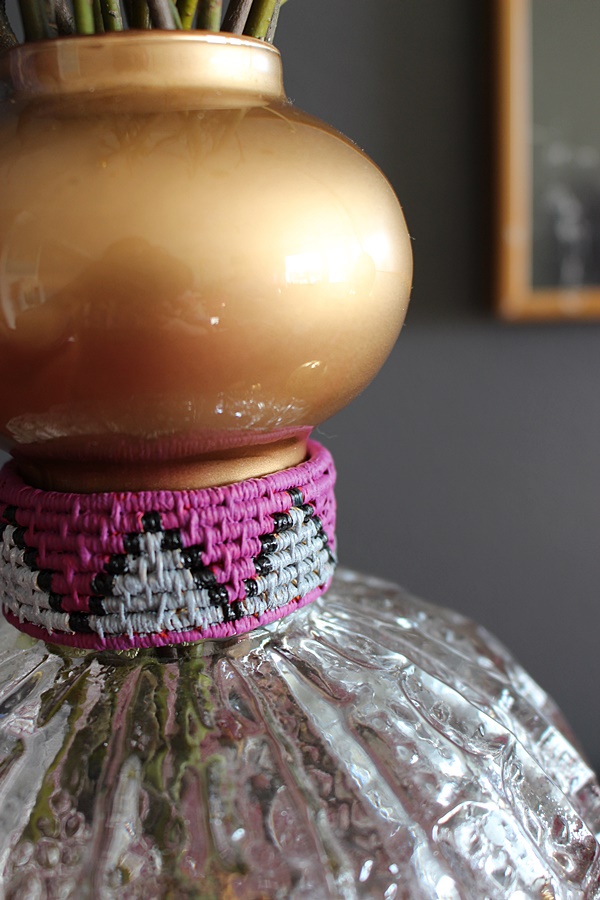 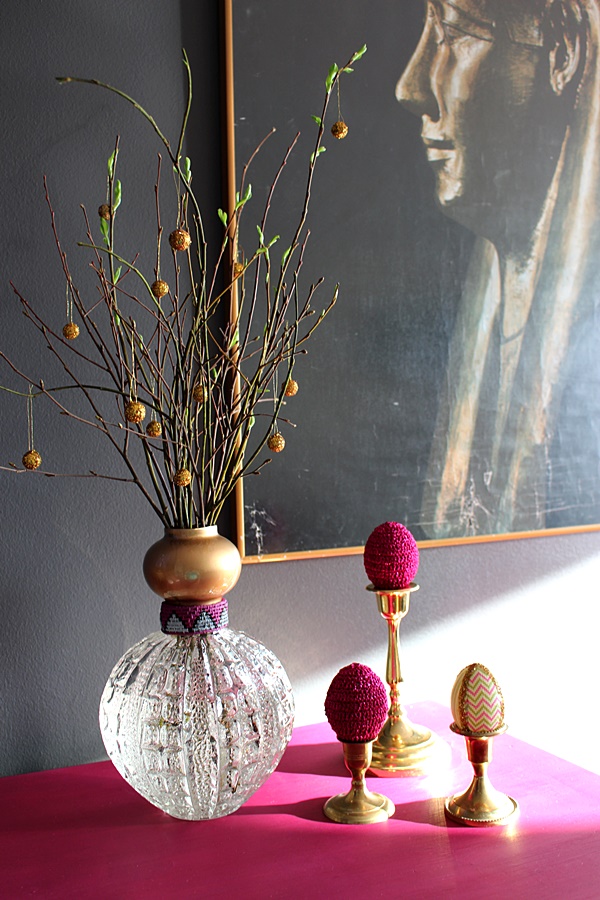 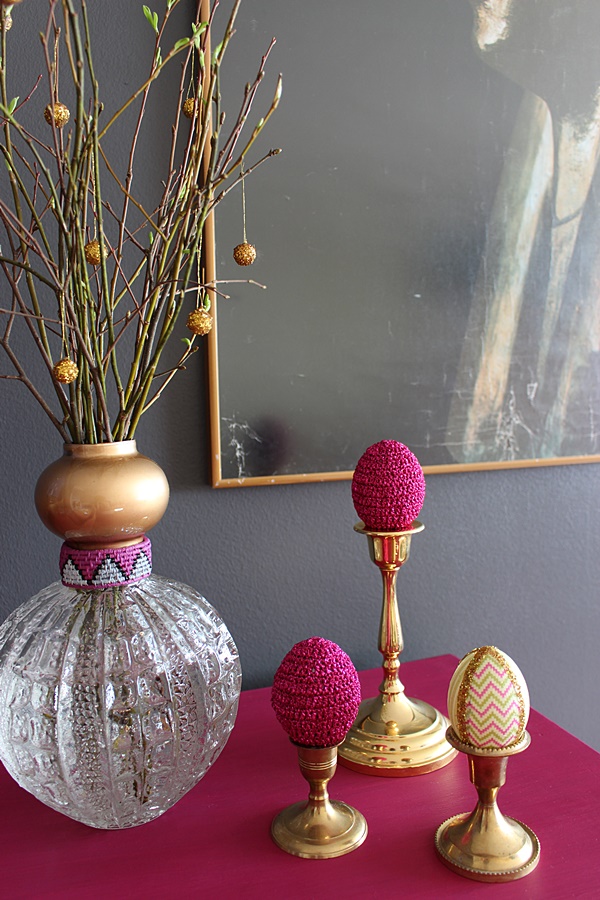 One tip to make a table setting or side table look more luxurious is to use candlesticks as holders for decorative eggs. I made these eggs last year, here is my 10 Ways To Decorate Easter Eggs- post! 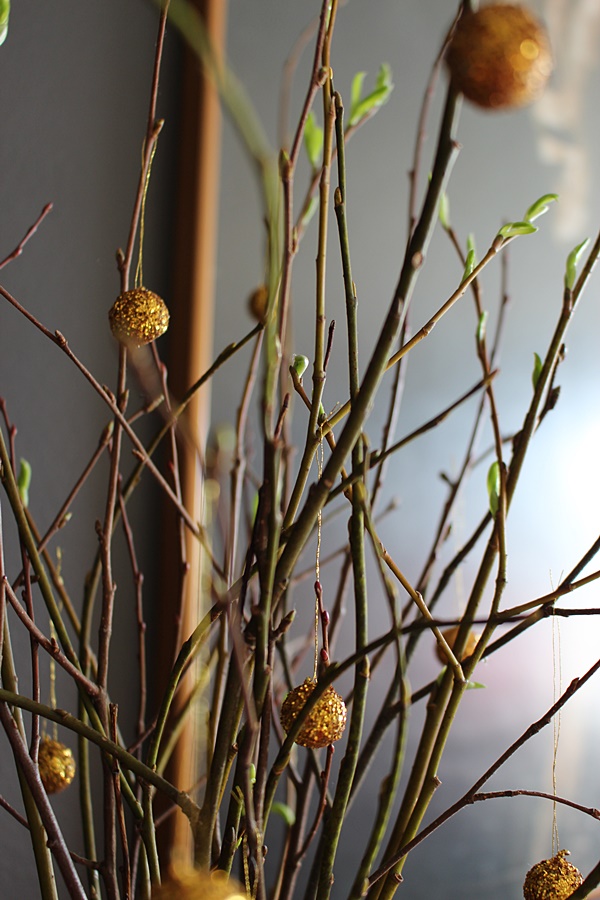 When you decorate the vase properly minimal decorations will do on the twigs. 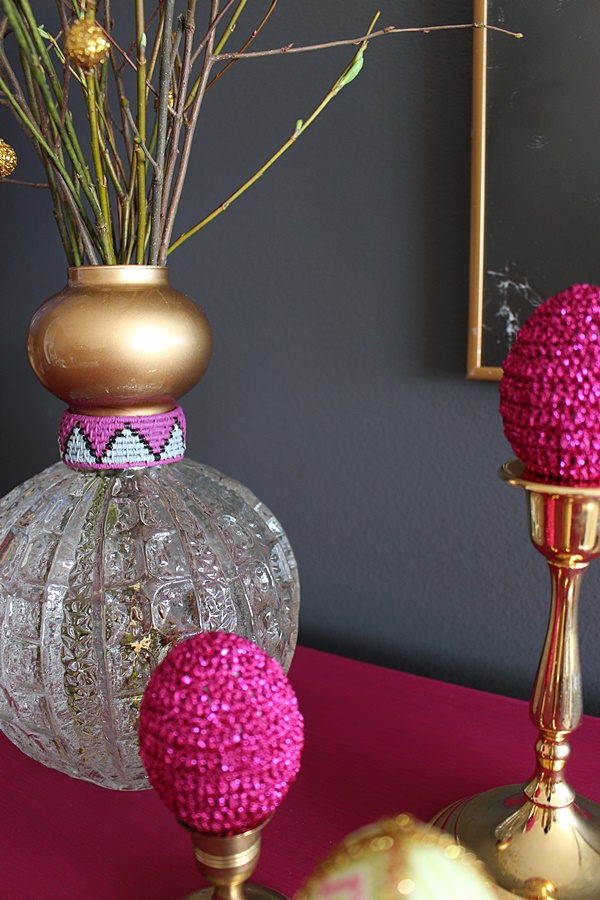 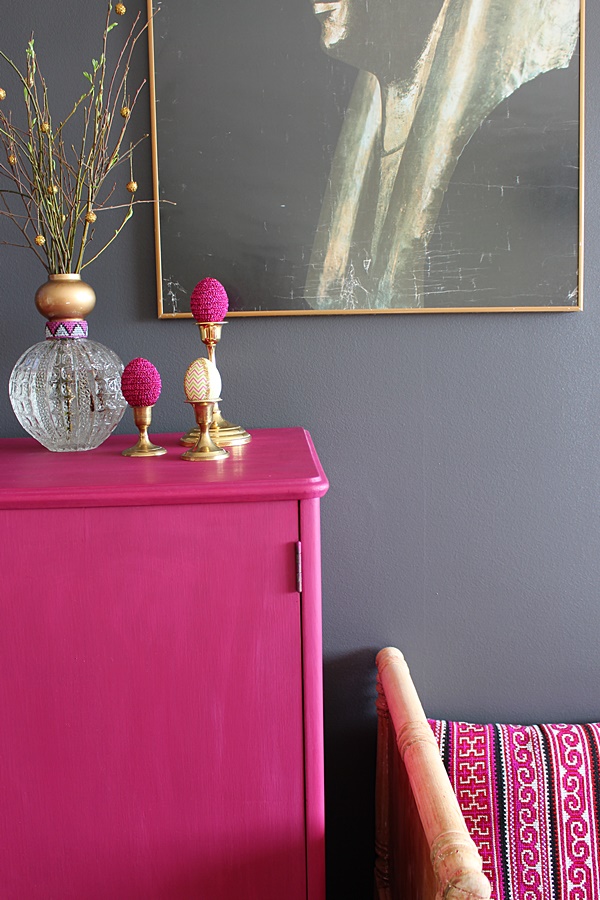 I think this arrangement could be from a fantasy movie, interesting looking vase, twigs with golden "berries" and glittery eggs on golden holders.

Next part of the Easter DIY Week will be on Wednesday with a new fun DIY project to make! What I can reveal to you is that it is going to be something modern and Nordic :)

Have an inspiring week!
Sannu
Posted by Sannu Vaarala at 18:57