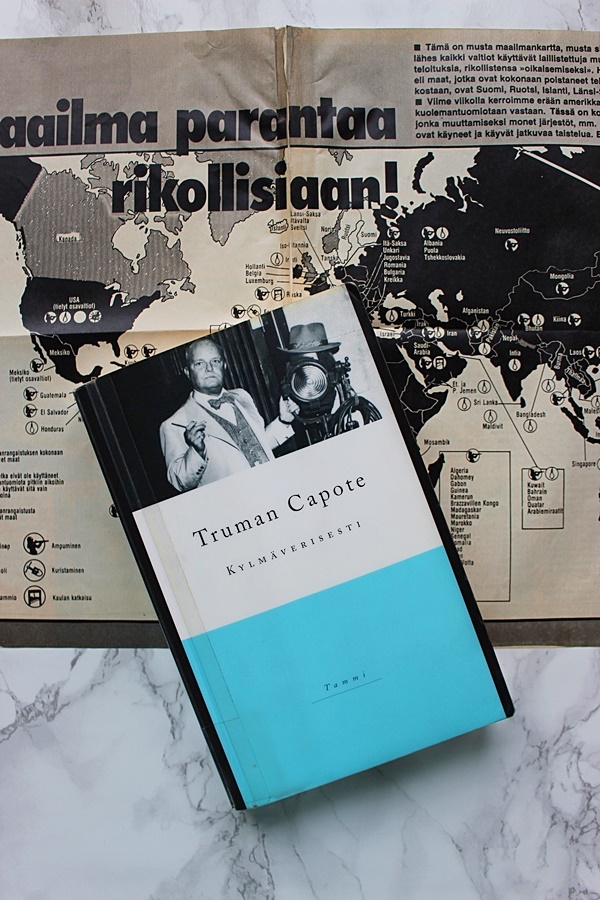 This week's book was far from light reading. Not that any of the books I have read this year were easy. What made Truman Capote's In Cold Blood so hard to read was that it is based on true happenings. Four people were murdered in 1959 without any reasonable motive. Murdered family was highly respected in local community and it took long for the people to get through and accept what had happened. Truman Capote went deep to the case and spent six years searching the happenings and people twined to it. Maybe because Capote gets so near to both victims and murderers, describing their life and thoughts in detail, makes this book so heavy to read. I am not a fan of crime literature and I have read maybe two crime related novels in my life. I am not curious to read crime and violence. I picked this book because it is a classic and brings up questions about good and evil and what is the purpose of punishment. I have read Capote's novel Summer Crossing and found the same melancholy and dark tones in this book.

5/52 Truman Capote. In Cold Blood (1965). I read the book in Finnish. First when people of the community hear about the murder of Clutter family they try to understand what motive and logic is behind it. The murders can not be comprehended with the logic of a healthy person. Clutters were hardworking, honest and highly respected in the local community and it was difficult to understand why anyone would want to harm the family. It rises the question why bad things come to people who don't seem to earn them. It is against what we are taught to believe. That when we lead a good lifestyle and treat our fellow humans with kindness we cannot be touched by any harm. Because when we choose to act according to shared rules and choose right instead of wrong we get a reward. As we know from our own lives and watching news every day life doesn't obey this system. This fact doesn't make us abandon the law. We still agree what is right thing to do and what is not allowed but considered crime or at least bad behavior against fellow humans. We have a conscience to guide us. That is why it is so shocking and almost impossible to understand what kind of person is behind crimes like in the Clutter case. People try to find a reason why someone has abandoned the common ways of acceptable behavior and violated the shared agreement about right and wrong. We need a special reason why it happened so we can continue believing. Because it feels unacceptable that crime like this could happen without reason as an act of randomness.

Truman Capote describes the murderers' thinking process before and after the murders. First it looks like the murderers and the happenings of the murder night are two separate things because the murderers seem so normal. When they go trough the night's happenings they don't seem to understand what they actually did. They seem astonished by the way things turned out and ask themselves why they did it. They also ponder the consequences and if it is possible to get through. It feels like they share the same mindset as the local community shaken by the murders. They look after reason. They are taught to believe in right and wrong and that doing wrong doesn't go without punishment. There is a plot we believe: Do good and you will be rewarded. Do bad and you will be punished.

When the murderers' road trip continues their twisted mind begins to reveal. In one situation they speak kindly to a man they are about to kill and steal his car. They use acts that express empathy but don't seem to feel empathy enough to prevent doing what they have planned. Capote also opens murderer's life stories and their mixed minds begin to make sense. Especially Smith has had very difficult childhood and youth. Both men are divided, they have one side that works according to common norms and other one that is violent, without empathy and not in control. When they think through their acts they sound like they don't always understand what the other side is doing. Even the Clutter family murder is random in the end. They have planned to go and rob Clutters and maybe even murder them. Yet when murder night is described it feels like one action lead to another without clear plan. That night's interaction between murderers seems to play a big role instead of shared plan. Even though the murder's environment and atmosphere is a result of a long time plan it's execution was a  thing of a moment.

Both murderers were caught and got a death penalty. I found strong criticism against death penalty in this book. It is questioned what makes killing a murderer different from murder. Reading the murderers' backgrounds made me think that they had both difficult mental problems. They murdered four people and it cannot be undone.  It is shocking that something like that can happen. Still killing the murderers doesn't bring the ones murdered back. It is interesting how even the members of the local community, who had known the Clutters, don't seem to agree about the necessity of the death penalty for Smith and Hickock. Doctors and specialist are called to investigate whether the murderers had mental problems that influenced to their actions on that murder night.

One of the crime's investigators, Dewey, says in the end of the book that murderers getting executed was not the actual closer of the case. It was when he saw young Susan, Nancy Clutter's friend, rush into her life. Maybe death penalty for murderers didn't bring peace to the victims and the community. More essential was to process what had happened, take time to heal and then concentrate to life. The community was shaken when it's norms and believes were questioned by the murderers' actions. But they got over the happenings and found again what they hold precious.

Map behind the book is cut out from Finnish Seura magazine from 1.4.1977. I once found it among other cut outs between a book that I bought from thrift store. Heading shouts "Näin maailma parantaa rikollisiaan!" (This is how the world cures it's criminals!) In the map you can see which countries had death penalty in 1977. According to this map in 1977 there were only six countries that didn't have a death penalty, Finland was one of those six. Map has changed a lot, not even all the countries exist anymore. According to Amnesty International (Amnesty International / Death Penalty) when they began their work to end executions in 1977 (same year when that map was published) there were 16 countries that didn't have a death penalty. In 2017 only European country that still uses death penalty is Belarus. 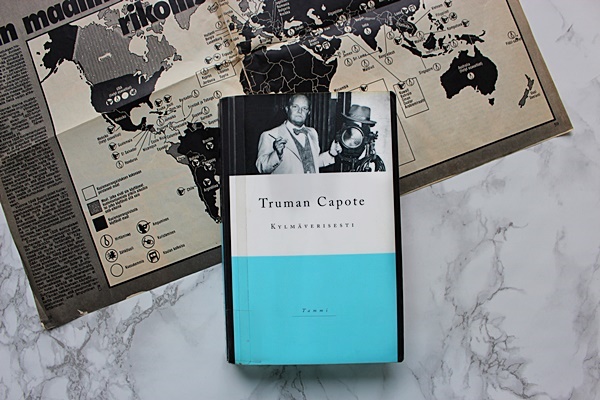